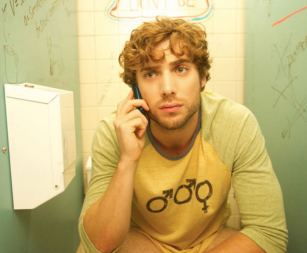 Max Landis is one of today’s crazy creative forces, whether he’s tackling superheroes or relationships, Landis always brings something new to the subject, dramatizing beyond control, spinning subjects on their head, adding new layer to a familiar story, Landis’s directorial debut proves that in a fun wild-ride through the madness of L.A. Choosing to focus on Luke Bracey’s character who is basically a booming t.v. actor whose new season is about to launch and he just discovered he’s gay, Bracey pulls Cory (Dustin Milligan) into his life to help him come out once and for all, it is then that madness ensues. From the very beginning you get a look at a Landis’s rainbow spectral, Landis’s crazy dialogue, and the explosive directing brought by the young Landis. But really, this film is about Cory and the fact that he’s been stuck in a quicksand for who knows how long, to a degree that he accepts the position he’s currently in even though he knows its the most miserable position he could possibly be in at that singular moment in time. Then you have Emily Meade and Angela Sarafyan’s storyline that intertwines with Cory, establishing a maddening circle of love whilst Bracey gets closer and closer to imploding and losing his mental if he doesn’t tell the world he’s gay. This is the basis of our story, a story that gets lost in the labyrinth Landis claims L.A. to be, here in depths of this circle of weirdness lie penis nightmares, neon-lit, cuckoo gay restrooms, and villainous super-models. L.A. is basically Landis’s Twilight Zone, where anything can happen at anytime and anyhow, playing to Landis’s off-kilter sensibilities. That’s where Landis shines in his depiction of the madness of L.A. using the world of Hollywood as this mysterious cloud that Luke Bracey’s part of, propelling gay festivals and bars to their max, Landis really makes L.A. to be some mystical landscape in which Cory definitely does not belong, so when there’s a random sword-fight or what seems like Maleficent 2.0 stalking her prey it fits with the story of the mystical, uncanny L.A. Landis has presented us with. As for the performances Landis brings out of his actors, its quite hard to describe, its very him, its loud and expressive, its like a modern Spanish Golden Age that was punched by Landis until it took the form he wanted it to take. There’s  a bunch of directorial flourishes that are really cool, such as random subtitles that appear on the screen to the express the truth behind certain words spoken out by certain characters with certain looks on their faces, the foreign mystic nature of L.A. is certainly shone bright upon, and there a lot of songs used that are very of its time, not as an today but rather when the film was filmed, that instead though jarring make this film feel like a period piece or time-capsule with some reality to it that will help you relate with its characters. All in all, Landis’s Me Him Her is a really fun, totally bonkers story about friendships, relationships, opening up, finding love and so much more, a 70 out of 100.