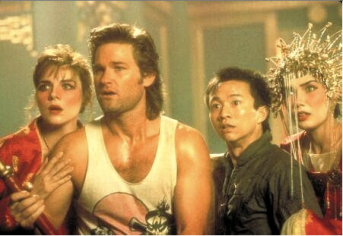 John Carpenter’s classic 80’s cheesy adventure film is a fun ride through the kung-fu filled lore of Carpenter’s vision of Chinatown. Led by Kurt Russell as the tough trucker looking for his truck and his friend, Dennis Dun who is somehow some sort of amazing kung-fu master. From the beginning you’re thrown into this world of Chinese mysticism where you encounter two opposite chinese factions fighting against each other with some cool powers that don’t quite hold up. From them on we get to delve into the secret chinese layers and the movie starts moving quite rapidly as Jack Burton’s (Russell) hero’s journey is sped up while kung-fu masters hurl kicks and electricity at him. That basically sums up the film, its a crazy synth-track accompanied crazy John Carpenter ride through his vision of Chinatown. Its an entertaining movie that moves quickly and even though it doesn’t hold up that well it still proves an entertaining watch, leading me to rank it a 75 out of 100.