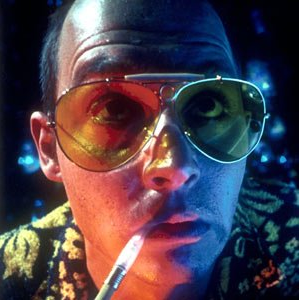 Terry Gilliam’s Fear and Loathing Las Vegas is a beautiful looking film with terrific camera work that follows two drug addicts trip through the induced nightmares of narcotics. Senseless, artistic, incomprehensible, brilliant,  a cult classic or trash, Fear and Loathing Las Vegas is a very divisive film for many, and upon viewing it I have decided to place it somewhere in-between its cult classic reputation and critical destruction. This film might provide the ultimate trip with its wacky, hallucinatory drug sequences in which the camera continuously moves as  the surrounding’s of the character’s its fixated on slowly morphs into Dali’s nightmares, I mean that’s all artistically stunning, but doesn’t do much more, I mean the film ends up just where it started, there’s no character arcs, the characters are quite despicable, and its mostly incomprehensible, sure its got some funny moments, but so do many other bad films. So definitely not one of Gilliam’s masterpieces, even though I must say there are glimmers of genius Gilliam here and there, especially during the narcotics conference and the fifteen minutes that follow that scene, but the problem here is that the film is so complexly weird that it can’t even get a grasp on itself. It might here and there, but those moments are so few and so apart that the rest seems boring. Then there’s the narration, the noire-esque aspect that works during those fifteen minutes of confused lizard Depp but just feel off-putting most of the times. All in all, Fear and Loathing Las Vegas is senseless, creative splattering on an already weird looking painting that just got a whole lot weirder, in other words a 52 out of 100.